There is a plethora of advice on yoga etiquette available: “Never come in to yoga class late.” “Don’t fidget during savasana.”  “Don’t leave early.” And on, and on. 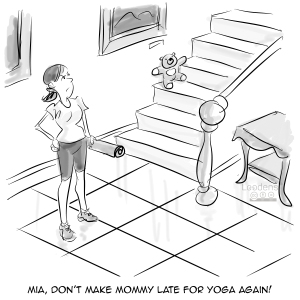 First let me say: I get it. Coming to yoga 5 minutes late can be somewhat disruptive, both to students and the instructor. Fidgeting during savasana might disturb your mat-neighbor, and leaving class early sends the signal that you’re only there for the ‘exercise’ (asana) portion. (Yoga is SO much more than exercise by the way.)

Frankly though: I’ve been there. I’ve been the person who is so wound up from my life, that I can’t lie still and awake for 5 minutes in savasana. (“There is so much I could be DOING right now!”)

I’ve been the person who has an appointment at 11am, but need the 10am yoga class so badly, that I’m willing to suffer the embarrassment of being the one who leaves early. (It IS courteous to let your instructor now if you’ll be leaving early though.)

I’ve also been the person who is rushing, shouting, and running to get a child in daycare and drive across town to drop in on a much-needed yoga class- only to arrive 5 minutes late, sneaking into yoga like I stole something. (This is not acceptable for your very first class, however…)

Isn’t part of ‘living our yoga’ being compassionate toward both ourselves and others? In a group class, being around other people is simply part of the package. People who, with all their faults, odd noises and smells, are simply doing the best they can to cultivate a more satisfying existence. So, the next time someone is shuffling on their mat, packing it in early, or clambering for a mat space because they came in late, imagine they are someone that you love. Imagine your father, daughter, sister, or brother, and trust they are doing the best that they can. Tell yourself to just be glad that they were able to make it, because they most likely are. (:

I work in marketing, yoga and the great outdoors. View more posts